Terveystalo's story began in 2001, when two private medical centers Medipa Oy and Vaajakoski Medical Center Oy merged. In the first year, there were four locations where 60 healthcare professionals served clients. Since then, we have strongly expanded our network and done more than 200 acquisitions. We currently serve our customers in their health and well-being in approximately 360 locations throughout Finland. In Sweden, we offer occupational health services at 120 locations.

During 2007-2009, the shares of Terveystalo's former parent company, Terveystalo Healthcare Oy, were publicly traded on the Helsinki Stock Exchange. However, the fast-growing and indebted company found itself in a challenging situation with the global financial crisis. The direction of the listed company changed in 2009, when Bridgepoint Capital acquired Terveystalo Healthcare Plc in a public tender offer procedure and the company was delisted. During Bridgepoint's ownership, Terveystalo centralized its group services and built consistent processes into a company formed from various acquisitions. In 2013, Bridgepoint sold Terveystalo to Swedish private equity company EQT. During the EQT ownership, Terveystalo invested in the development of digital services, consumer branding, the development of the quality of medical services and building the nationwide network. After the private equity ownership phase, Terveystalo was re-listed on the Helsinki Stock Exchange in 2017 and has today a strong and committed Finnish ownership.

The company's twenty years of operation have included several significant acquisitions that have shaped the direction of Terveystalo. The Diacor acquisition in 2017 accelerated the growth of the clinic network, especially in the Helsinki metropolitan and Turku areas. The acquisition of Attendo Health Services in 2018, in turn, increased the range and expertise of health services offered to the public sector. The expansion into oral health services began already in 2015: the goal was to build Finland's first nationwide network of oral health services and to offer comprehensive oral health services integrated into primary health care for both private and occupational health clients. Through acquisitions, Terveystalo has also expanded our range of services to cover the entire integrated care chain.

In 2021, Terveystalo expanded operations beyond the borders of Finland by acquiring Feelgood AB, one of Sweden's largest providers of occupational health services. In addition, our Rela chain offers massage services in Estonia.

Over the last ten years, health care has developed significantly with the help of technology. Terveystalo centralized and standardized its business in 2010–2013, and invested heavily in technology in order to serve its customers even better and more efficiently. The customer also became even more at the heart of the strategy. A key step in strengthening the customer's holistic care chain was the investment in Terveystalo's first hospital unit in Kamppi, Helsinki, in 2010. Strong customer focus was also supported by digital services, which were launched in 2013 with the Oma Terveys web application, and three years later we brought our customers digital services to a mobile application. Today Terveystalo-application is home to our remote services and already has more than 500,000 active users in Finland. 1.7 million people in Finland have registered as users of Terveystalo's digital services.

The journey to this day has been full of colorful stages. However, our mission is clear and being promoted every day by our 14,800 health professionals and other experts: we are fighting for a healthier life. 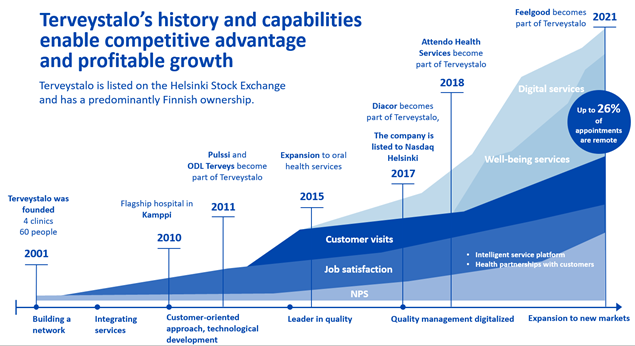